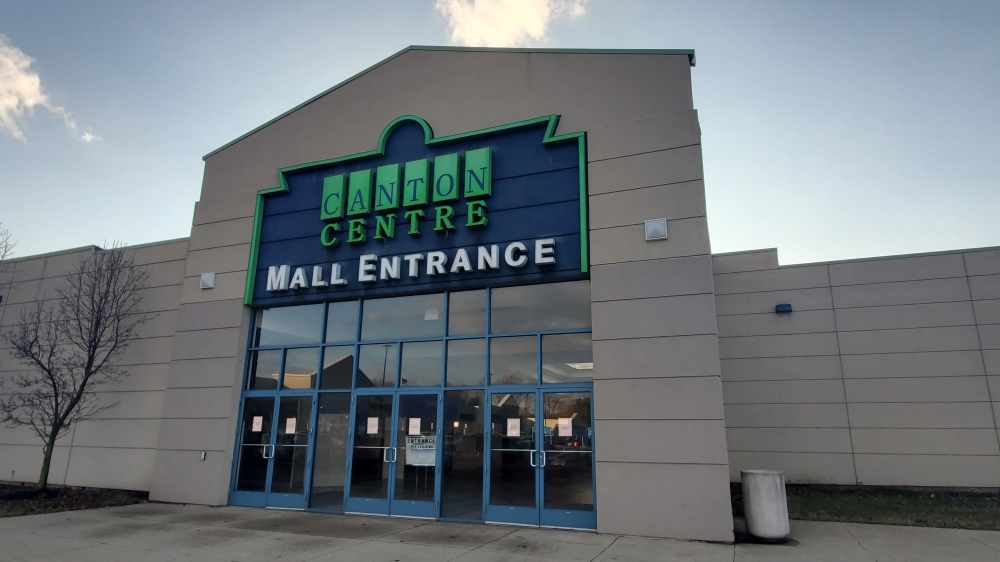 “Why am I still here.”- Canton Centre

Canton Centre Mall formerly known as Mellett Mall, opened in 1965 as an open-air shopping center. The Mall’s history goes far back beyond 1965 though, way back to the year 1926. The name Mellett was in honor of a Canton newspaper journalist named Donald Ring Mellett who was murdered by the Canton Mob way back in ’26. After World War II, a housing development of barracks were built on the land of what is now Canton Centre. In the early 1960’s the residents of the barracks formed a corporation known as Mellett Homes and developed the Canton famous Mellett Mall to be named in honor of Donald Ring Mellett. Just one year after beginning operation, the already dated open-air shopping center was converted into an increasingly popular enclosed shopping mall, making Mellett the first enclosed shopping center in the Canton area. Just 4 years later though, the still operational Belden Village Mall was built about ten minutes away which would eventually attribute to the demise of this place. Original anchor’s to The mall were Penney’s, Zwick’s, and O’neil’s. The mall was popular throughout the late ’60s and throughout the ’70s but quickly saw troubles by the early ’80s. The real death of Canton Centre can be contributed to many things, firstly Belden Village. Whenever a newer mall is built nearby a preexisting one, it typically causes trouble for the existing mall. Not only did Mellett have to compete with Belden Village, but also Rolling Acres just 30 minutes away. On top of that, a Wal-Mart was built directly next to the mall bringing customers over to a much more cost effective shopping experience, thanks again Wal-Mart. Nevertheless, Canton Center while not doomed from the start, had to face a lot of obstacles which would eventually lead to its closure in the early 2000’s. Currently, there is one anchor still in operation, and that title belongs to JC Penney.

By this point you must know that I live in Akron, and I really thought for a while that I knew about every mall dead or alive in the area, that is until I found out about Canton Center. Sal (Fellow mall enthusiast and YouTuber), whose videos I frequent brought me to Canton Centre through his Vlog. If you have a chance to check out his videos you should, he’s got some really great stuff. Regardless, after finding out about this place I knew that the next day I had to go check it out and this is what I discovered.

It’s not a big place but what you can see from the outside is pretty cool, especially this former Kauffman’s. 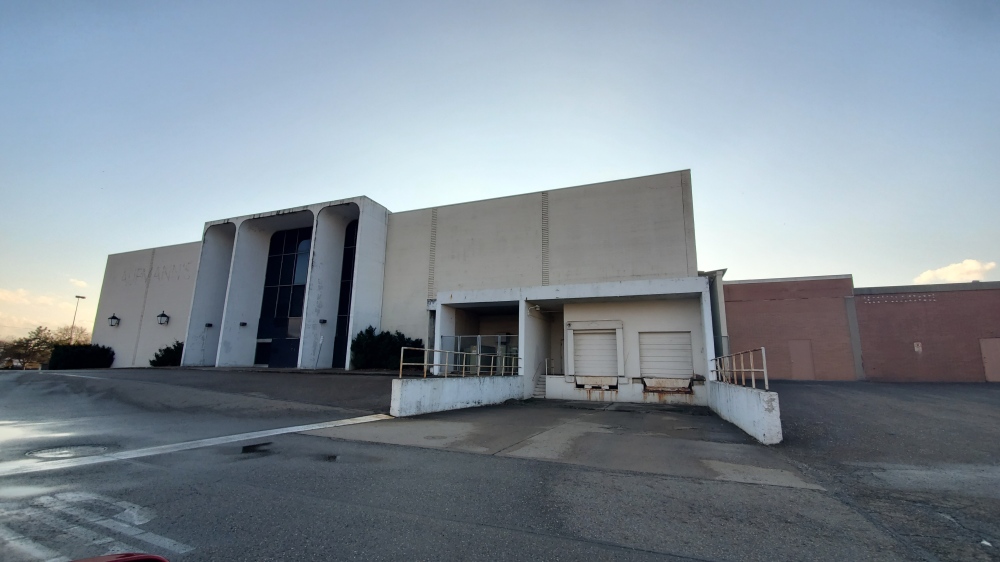 Remind you of anything? Here’s Rolling Acres Mall pictured by me in 2017. 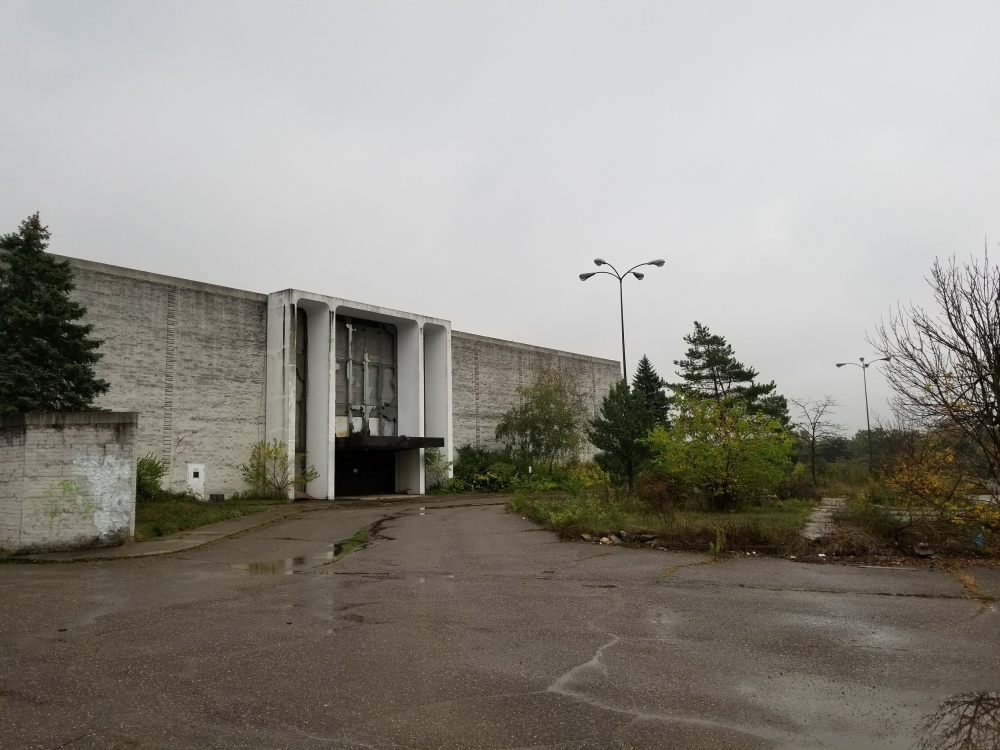 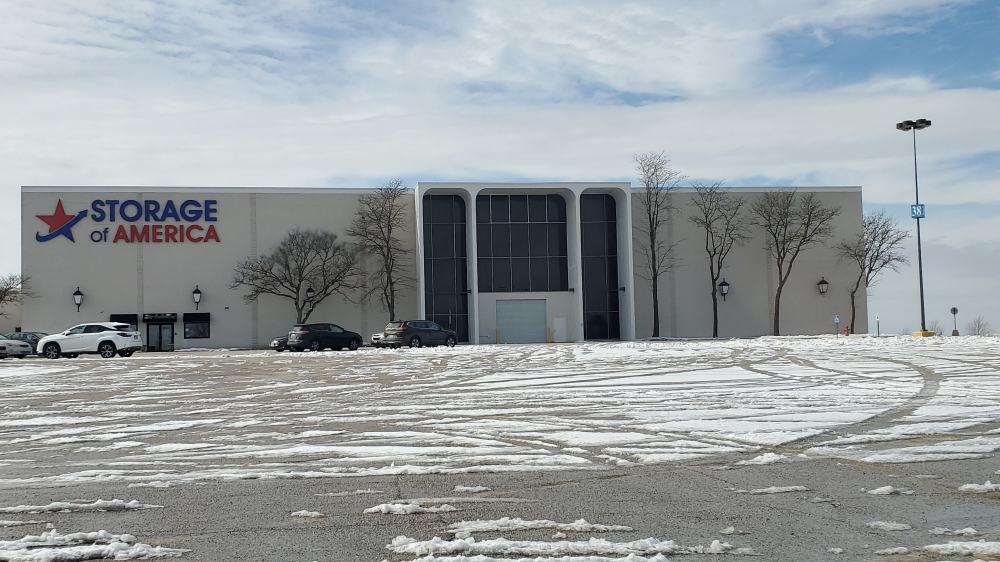 If you read my Chapel Hill blog I took note of the similar design. All buildngs were originally O’neil’s, then some became Kauffman’s, and finally Macy’s. Some like Canton Centre’s never even became a Macy’s. I really love the architecture of these buildings, the developers did a stellar job in the ’60s on these places and I’m glad the facades were never really touched.

Video production skills off of a Galaxy S10 at its finest. 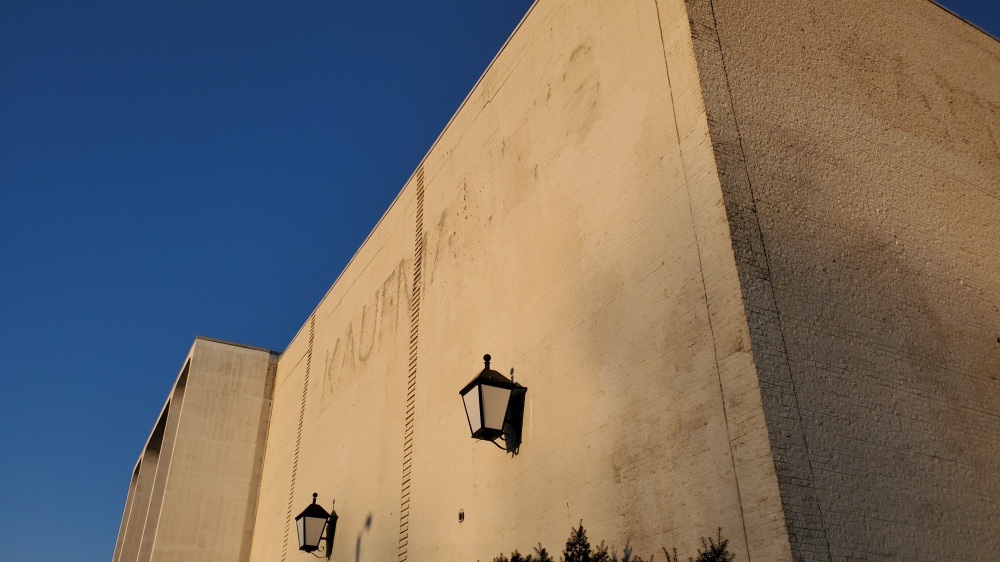 Gotta love a big label scar. Nevertheless, this and the entire mall was covered in mold due to severe water damage. Check out the former garage under the retail space. 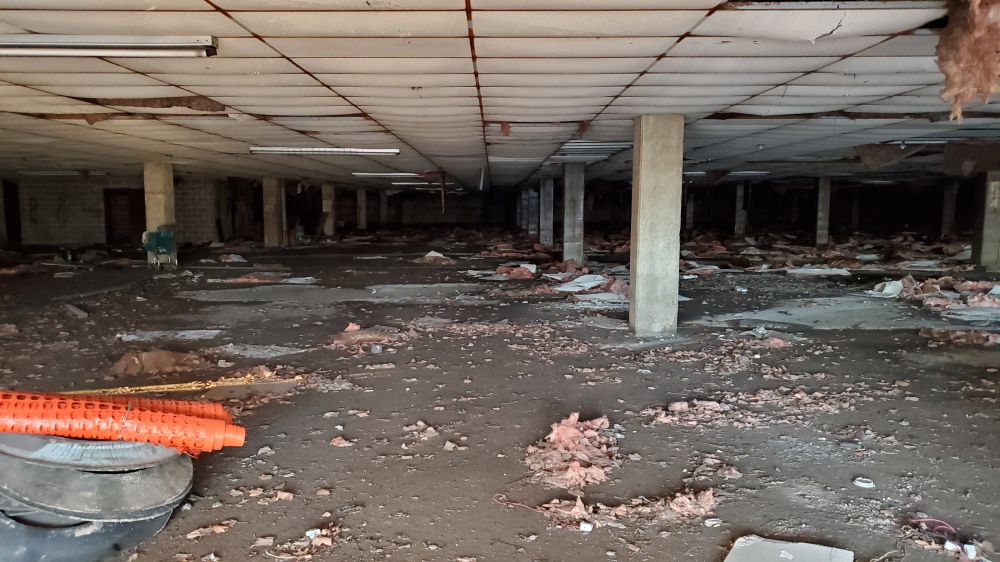 There’s even mold on the ground outside of it. Let’s move onto the only open anchor, a vintage JCPenney. 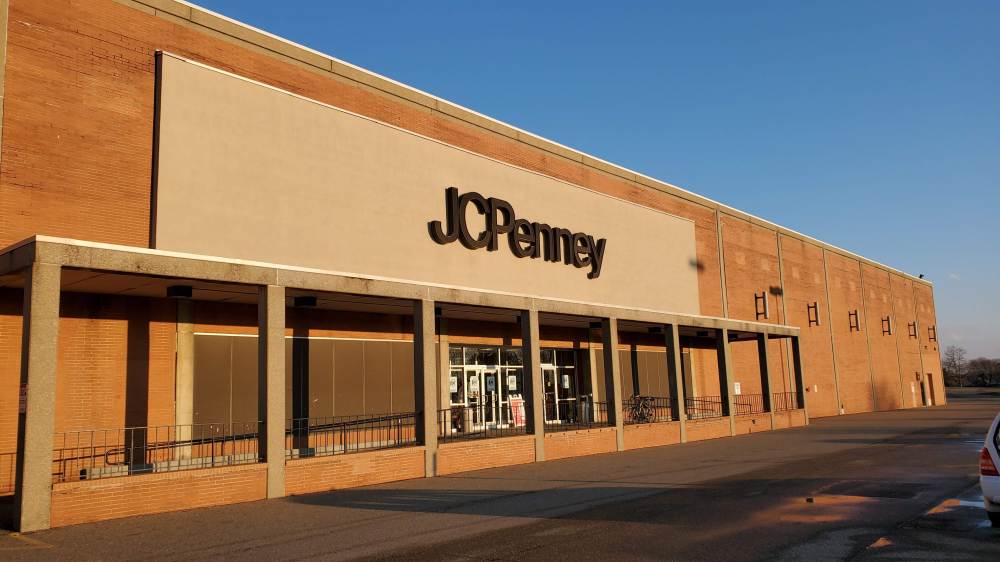 Once again, JC just has the best architectural design out of any of the anchors. The clean mid century lines are something to adore along with the original exterior tube lights. Not sure if this package pick-up door is still being used in 2020 but regardless it’s a really cool sign. 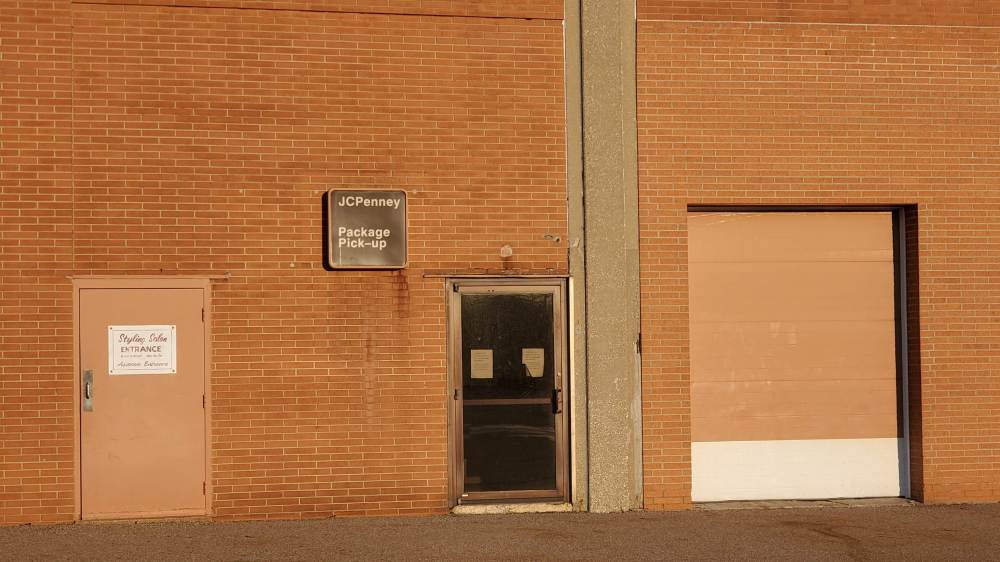 Unfortunately the door to the JC corridor of the mall is now blocked by shoe racks but I threw my phone up in the air and grabbed a few pictures of the interior from my tippy toes. 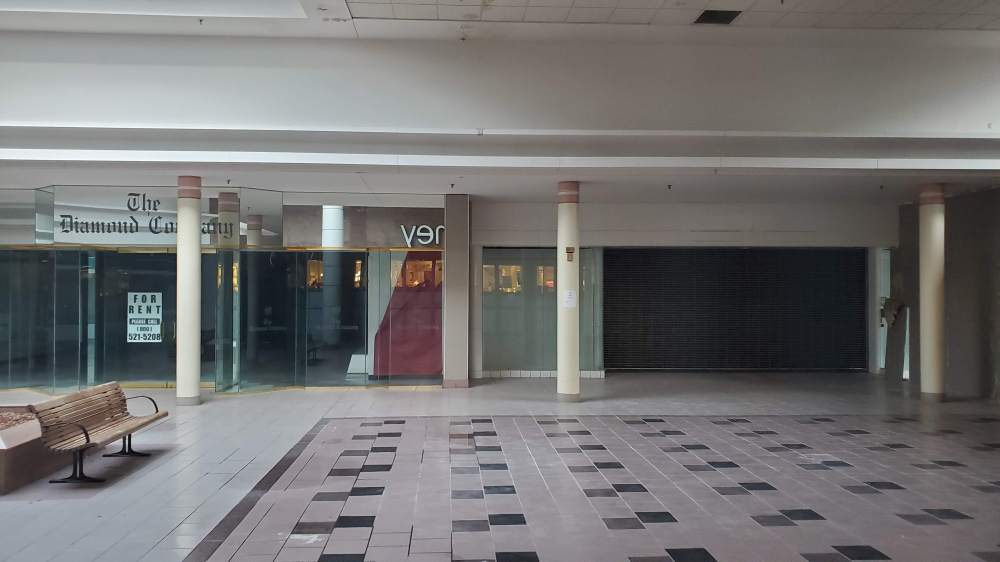 Aside from minimal water damage, this side of the mall really isn’t in too bad of shape compared to the “moldy wing.” 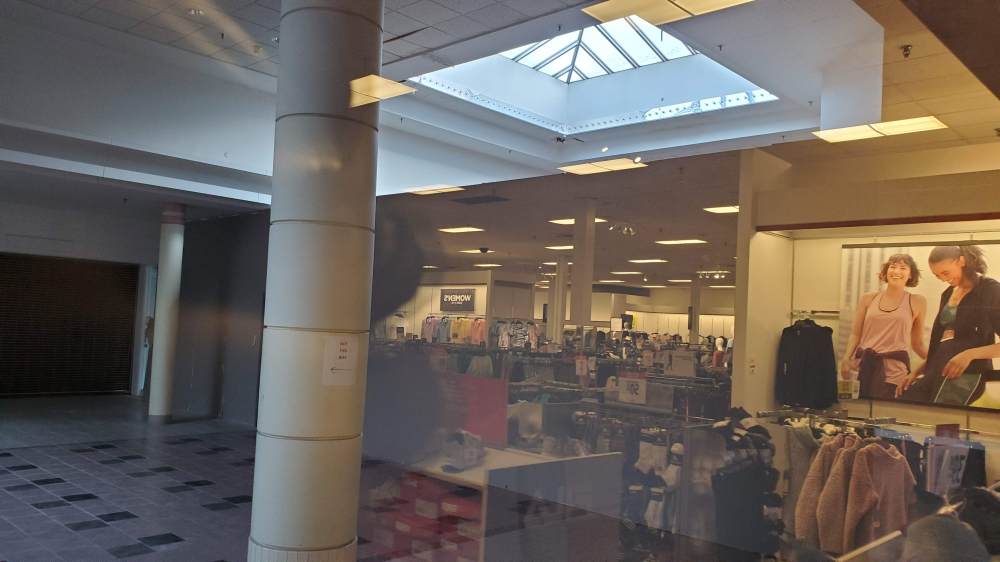 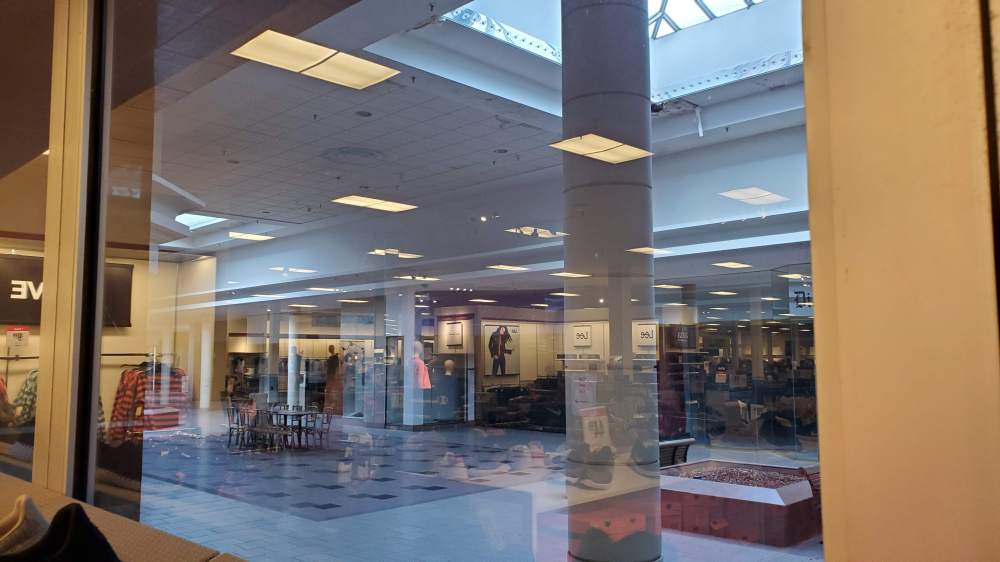 Great skylights in here, clearly added in the late ’80s renovation. Let’s take a look from a different angle. Looks like it could’ve closed a few years ago. This is absolutely nothing in comparison to the other side of the mall. 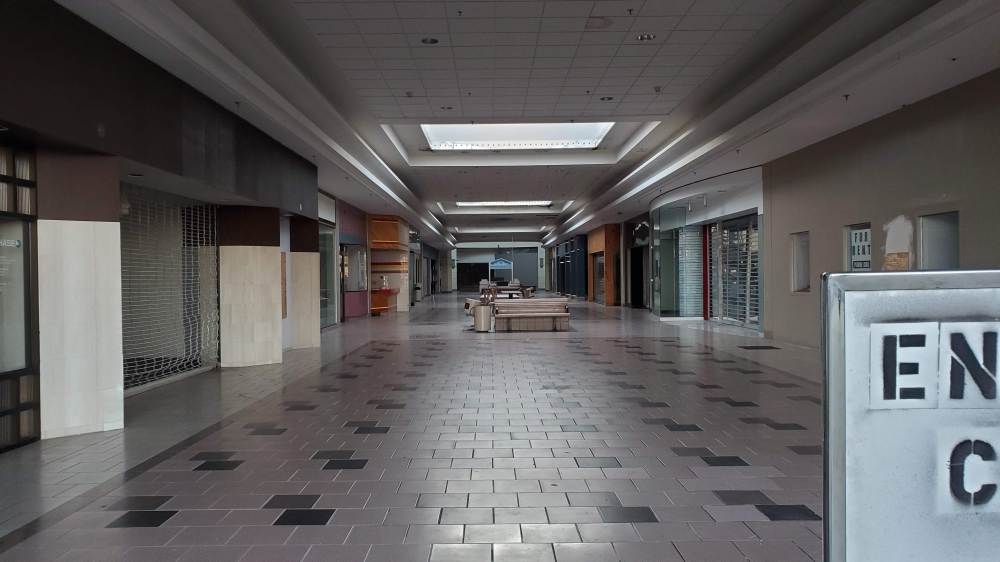 Speaking of the other side, here’s the exterior of the “moldy wing” entrance, pretty beat up. 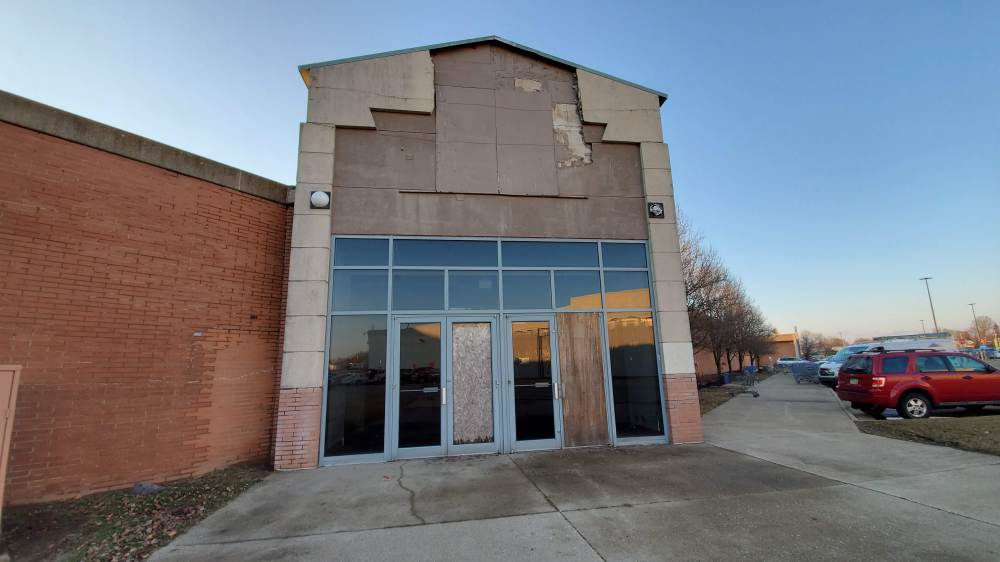 Okay. Are you ready for the interior? It’s really gnarly. 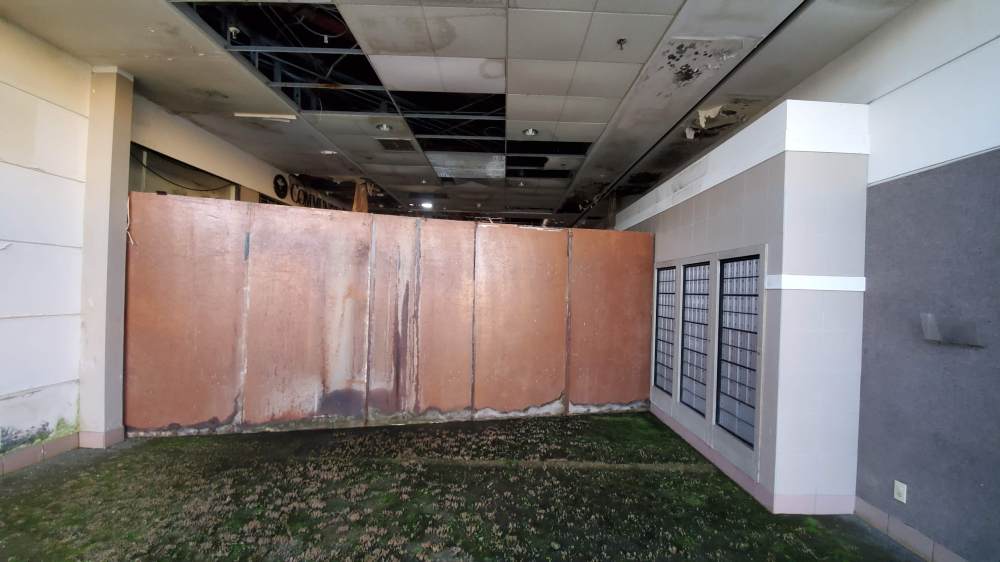 I guess that’s what almost 20 years of zero maintenance will do to carpet. Hell I don’t even know if it’s carpet but whatever it is, if you manage to ever get in here please do yourself a favor and wear a mask. On another note, I find it odd that there was a tiny little 9/11 memorial brick put up just a few years before the mall closing. 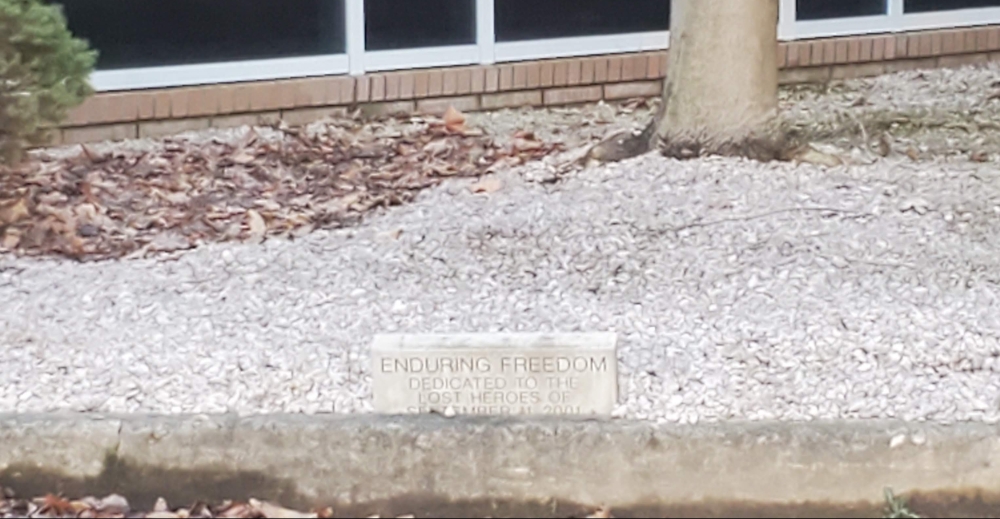 Freedom aside, I tried every entrance, door, etcetera outside of this place and unfortunately I just wasn’t able to get inside. This entrance though was definitely my favorite, I really love the grand 1980’s sign. 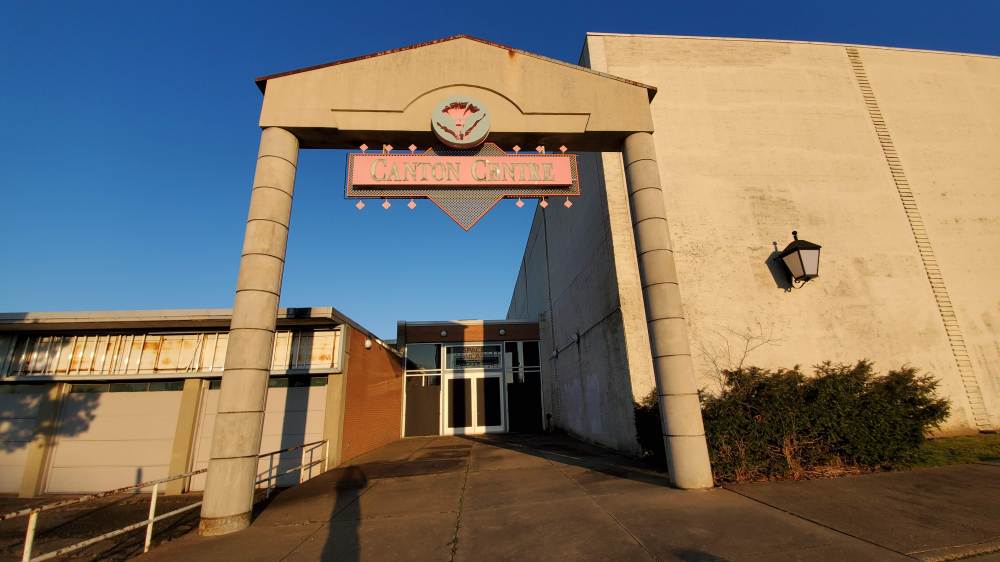 Also I just wanna throw out this sick pic I got. Plus it helps show you guys just how bad of shape the parking lot is in. 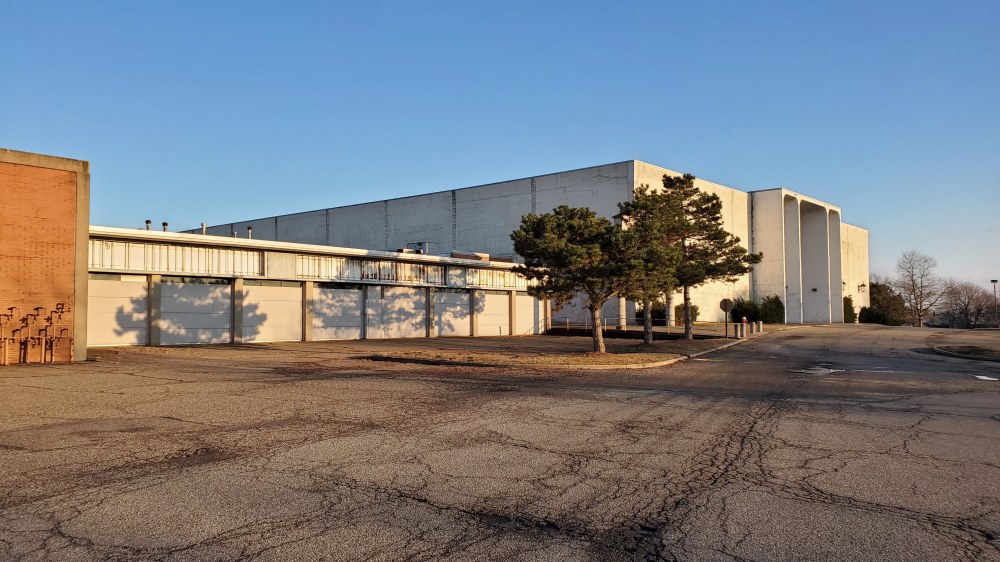 Northeast Ohio to a T. Here’s one of the reasons this place died, and it’s not due to amazon because this place has been dead long before online shopping began killing malls. Built right in the same parking lot to Canton Centre. 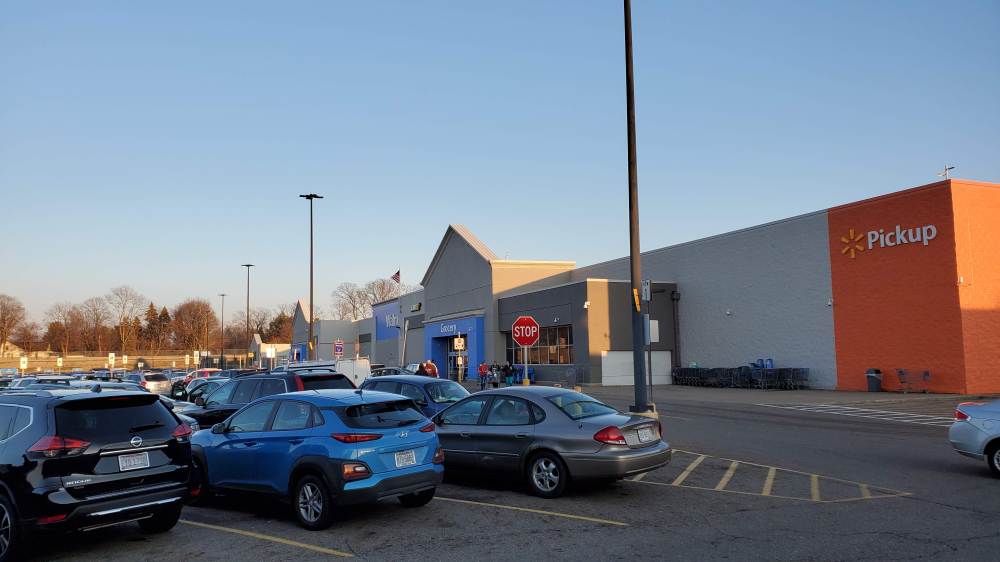 Wal-Mart fucks other businesses part 10,000. Oh and this guy, remember. 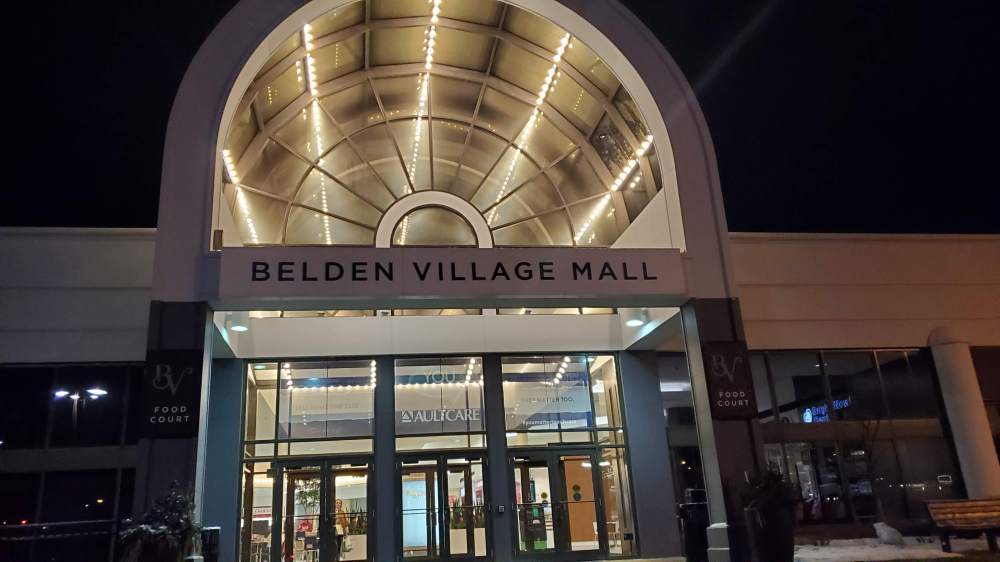 Canton Centre is a tough one for me to conclude on. I was never able to see it open, I never got a chance to really check out the inside, and I couldn’t find too much information on this place. Despite that, it was a smaller mall, but it seems like it was a nice little neighborhood mall that could still be great today if there was a market for that kind of shopping center. Overall it was a really cool place to checkout and if you live in NE Ohio you should definitely make the trip here to see what’s left before it’s all gone. 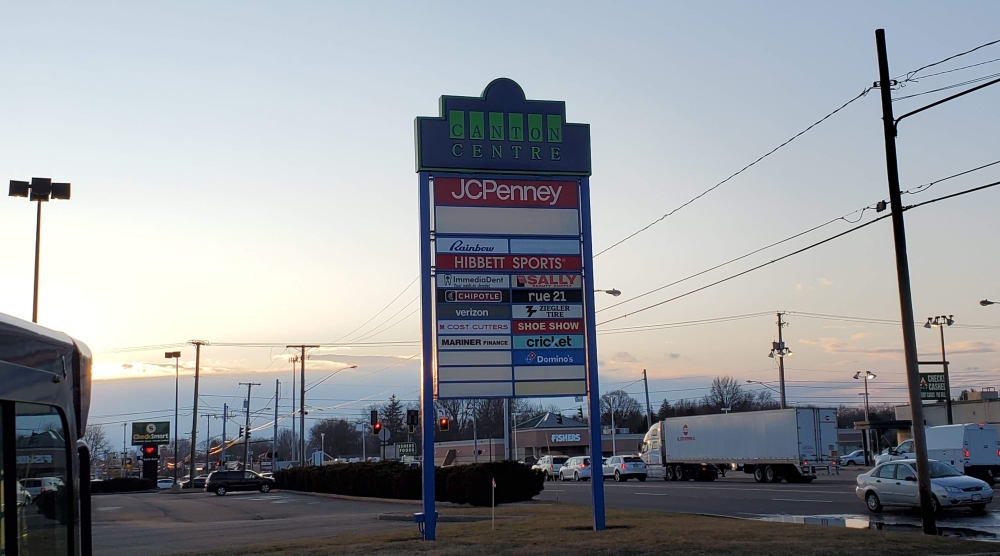 “Just put me out of my misery already.”- Canton Centre