“I was once one of three directional malls in Columbus. Though I was sent off to mall heaven, my corpse will remain in light.”- Westland Mall

Last weekend I decided to venture back home to Cincinnati to visit my family and take a little day trip down to yeehaw Tennessee, but on my way I had to stop to pee. Oh, and also visit Westland mall which I peed on. Columbus has a few malls which I wanted to check out but have never gotten a chance to; the city is home to many indoor shopping facilities such as the infamous Polaris, The Mall at Tuttle Crossing, Easton, and Eastland, not to be confused with the much newer and nicer Easton.

Having been to Polaris and Easton more than a handful of times, I knew I had to check out someplace new; I just didn’t know which. The Mall at Tuttle Crossing has a wonderfully ’90s brass and marble interior, but is actually doing quite well at the moment. Eastland (a sister mall to Westland), despite offering that dead mall kick for me, still left me with the desire to check out something different for you guys. So I hopped on I-270 W instead and checked out Westland, which will be the first abandoned mall review I have ever brought to you.

Opened in 1969 (nice), Westland Mall offered a wide range of shopping for all suburbanites living in the western outskirts of Columbus. Though first an open-air shopping plaza, Westland was enclosed in a 1982 renovation to help pull in more attention from the other malls around the area. The mall was one floor and featured four anchor stores, giving it a solid 860,000 sq. ft. of retail space. Originally, the anchor stores were occupied by Lazarus, Penney’s, Sears and Woolworth, though many of them did not last long. Westland finally became enclosed in 1982 but already began to struggle by the early-mid-’90s.

In 1994 Woolworth’s Closed and in 1997 The Mall at Tuttle Crossing was constructed just a few exits north off of I-270. On top of that, the extravagant Polaris Fashion Place was built in 2001 near the intersection of I-71 and I-270, essentially pulling everyone away from Westland and into these newer, bigger, and superior shopping malls. In 2012, the mall closed after a decade-and-a-half of struggle and in 2017, Sears, the final anchor holding onto this place, closed their doors. Westland was built by the Richard E. Jacobs Group who also developed South Park Mall (which we’ve already learned about), and the two sister malls to Westland: Northland (demolished in 2002) and Eastland (still in operation but dying, future blog coming soon). Seems like Richard E. Jacobs knows how to develop in northeast but not central Ohio.

I wish I was able to find more information on this place or pictures of the interior but it’s difficult to find much so I’ll do my best showing you what’s left on the outside.

This is not a very attractive mall, and it is totally understandable why it failed with the amount of nearby competition that it had. 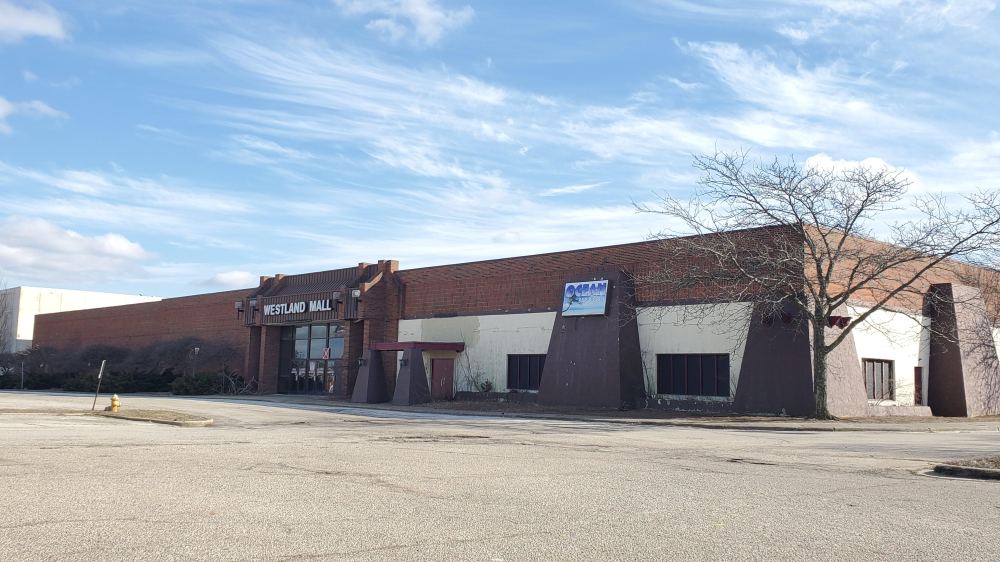 Hard to imagine that this place was still in operation just eight years ago with the way that it looks from the exterior. There appears to have been some shitty looking beach themed bar right next to the main entrance that was most likely flooded with boomers until this place closed down.

Anyone still want to buy it? It’s up for grabs.

The shrubbery under the sign looks very well kept. The entire parking lot is in abysmal shape, but that is honestly a common theme with nearly every parking lot in Ohio. 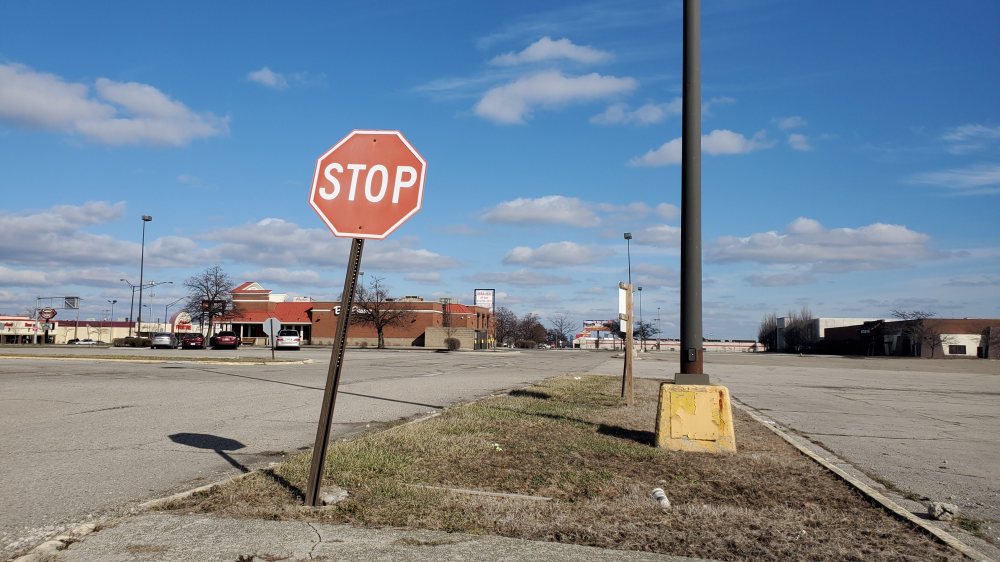 STOP in the name of Malls! Credit @The Supremes. Next we have the exterior of what was once Sears. 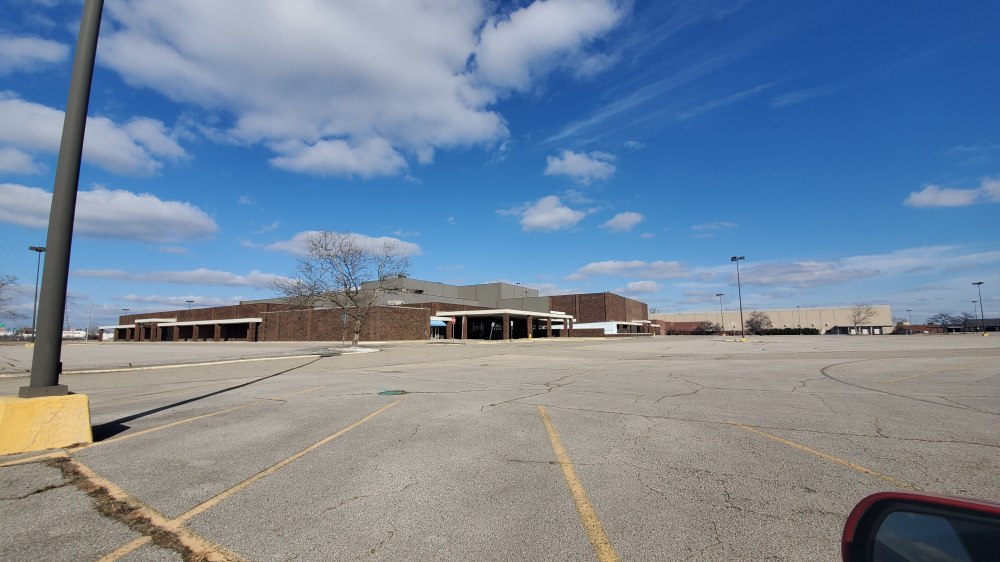 The parking lot at this place is unnecessarily huge and that’s not just my fish-eye lens making it look that way. Believe me, it is bigger than a lot of larger mall’s parking lots that I have been to. 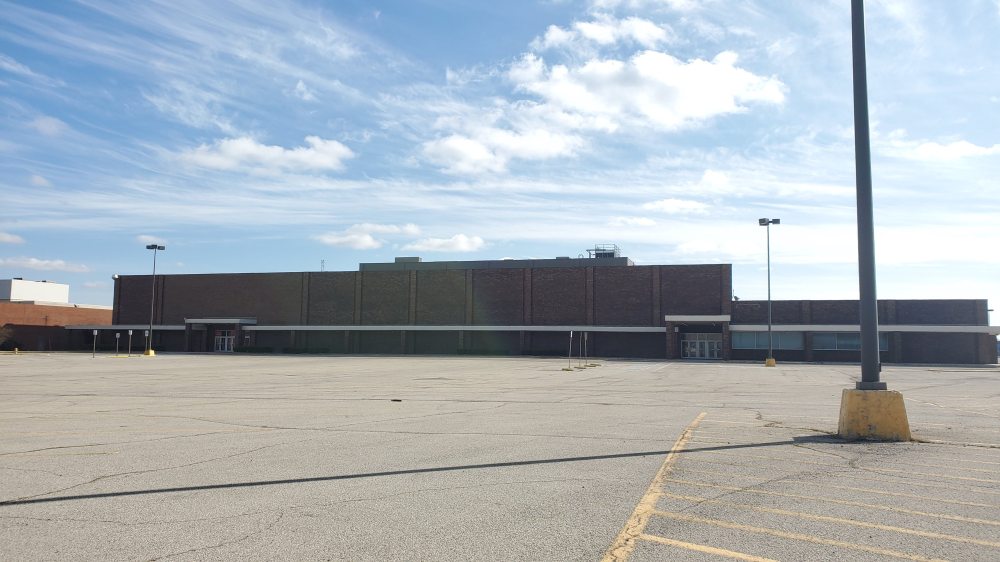 My weekly reminder that Sears stores DO still exist, just not this one and the other 99 percent of them. 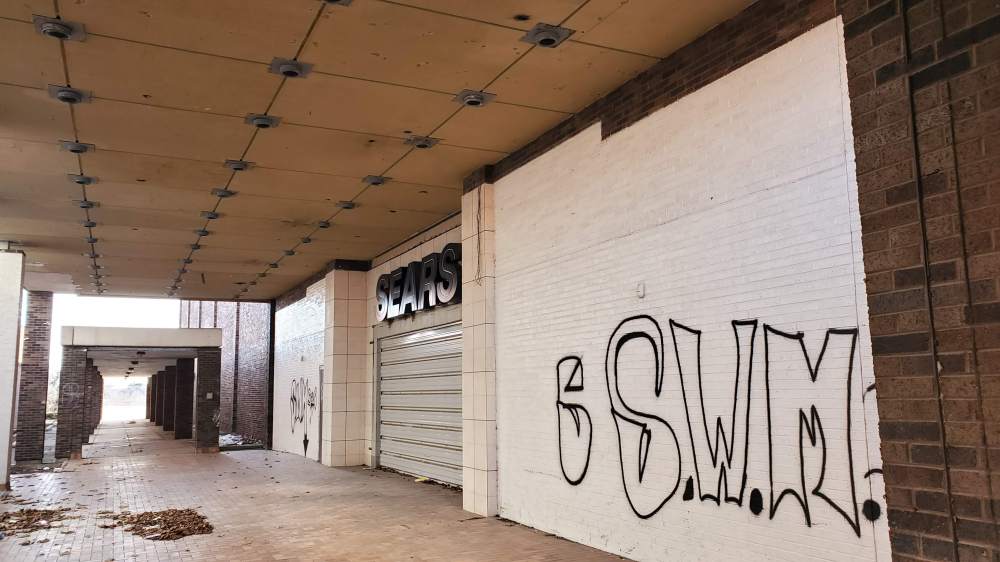 That picture was scary as hell to take, I felt like there were squatters surrounding me and hiding behind those pillars. 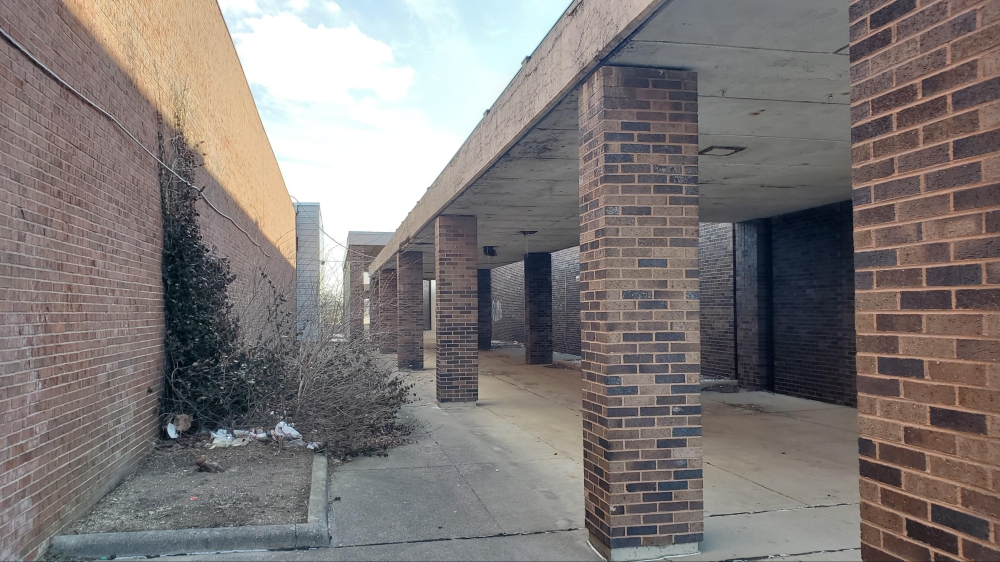 *Eeriness ensues.* This place is absolutely littered with graffiti.

Oh, and people wipe literal shit on the doors.

The sky really was gorgeous that day. Onto the next anchor, and I’m not quite sure which one this was but it’s smaller than the other three.

Again it’s ugly. It’s just a really ugly place but I manage to find beauty in it. Moving on, we have the exterior of Macy’s which was last in operation in 2007. 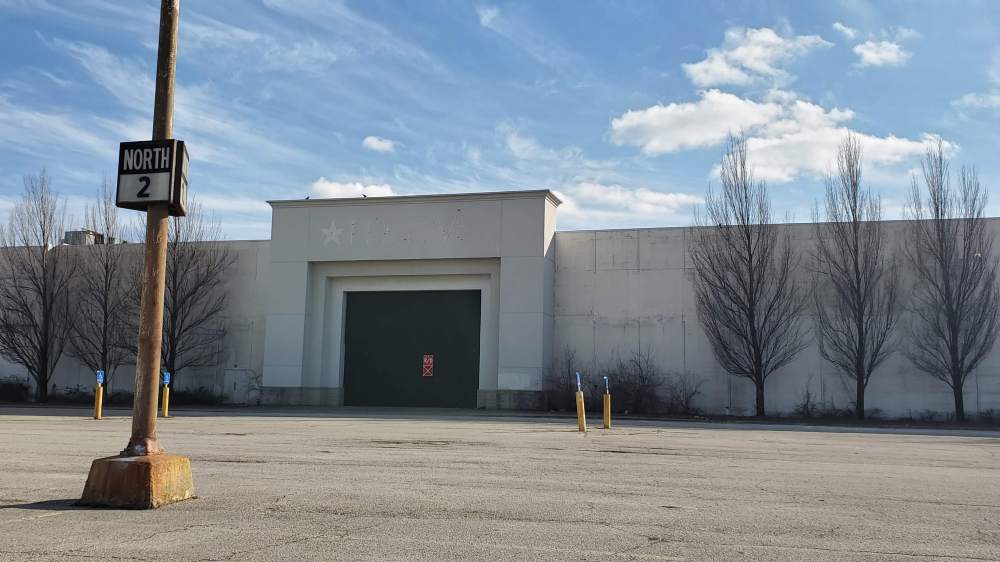 Big label scar there and a cool shot with the rusty light post and sign. Next we have the outside of the former JC Penney, which is the only saving grace from the exterior. It seems like at most malls I visit, the original JC Penney’s are always the best looking of them all.

Check out all of this overgrown nature near the rear entrance. ENTER AT YOUR OWN RISK! 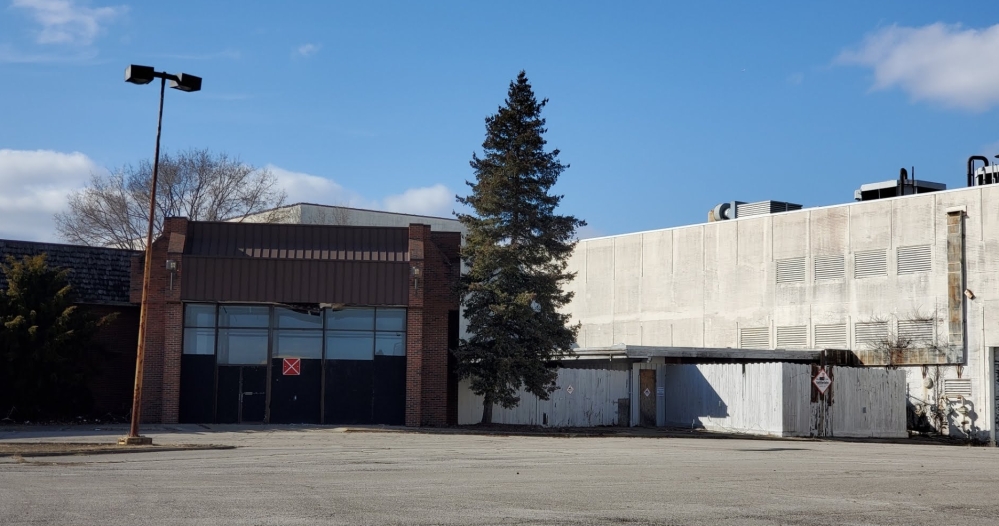 I wanted to get inside so bad in order to steal something but every door I checked was locked or boarded up. 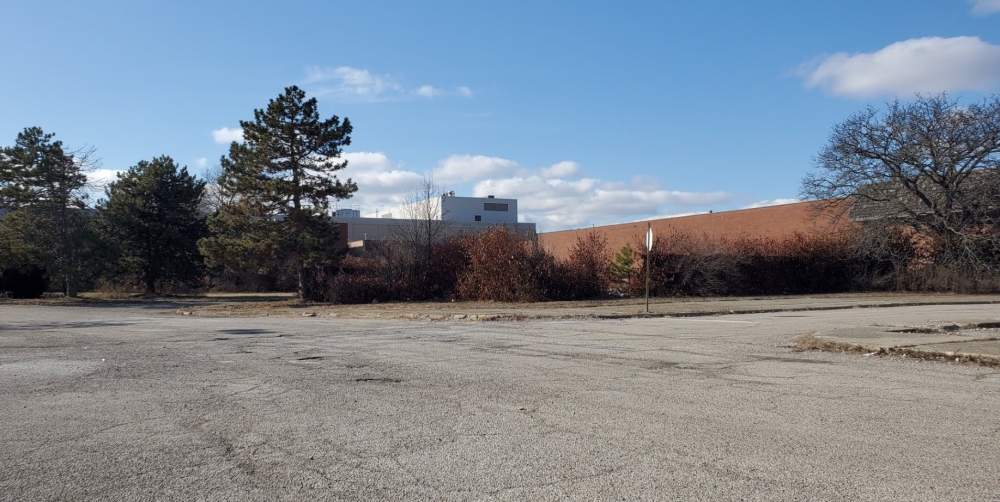 I don’t even know if there’s an entrance back behind there. Keep in mind that in just 2012 this place was operational.

As I said before I wasn’t able to attain much from my visit but I do have a few pictures where you can see the wreckage that’s inside.

Pretty damn cool huh? I found a few videos from YouTubers where they’ve managed to break in. I’m not sure how they did it but I’d like to know.

Pardon me and Rosie’s reflection.

“Water damage, broken glass, and shit on the doors! You name it, we got it!”- Westland Mall

The door not covered in shit has a cool fire code violation from 2016, how surprising. 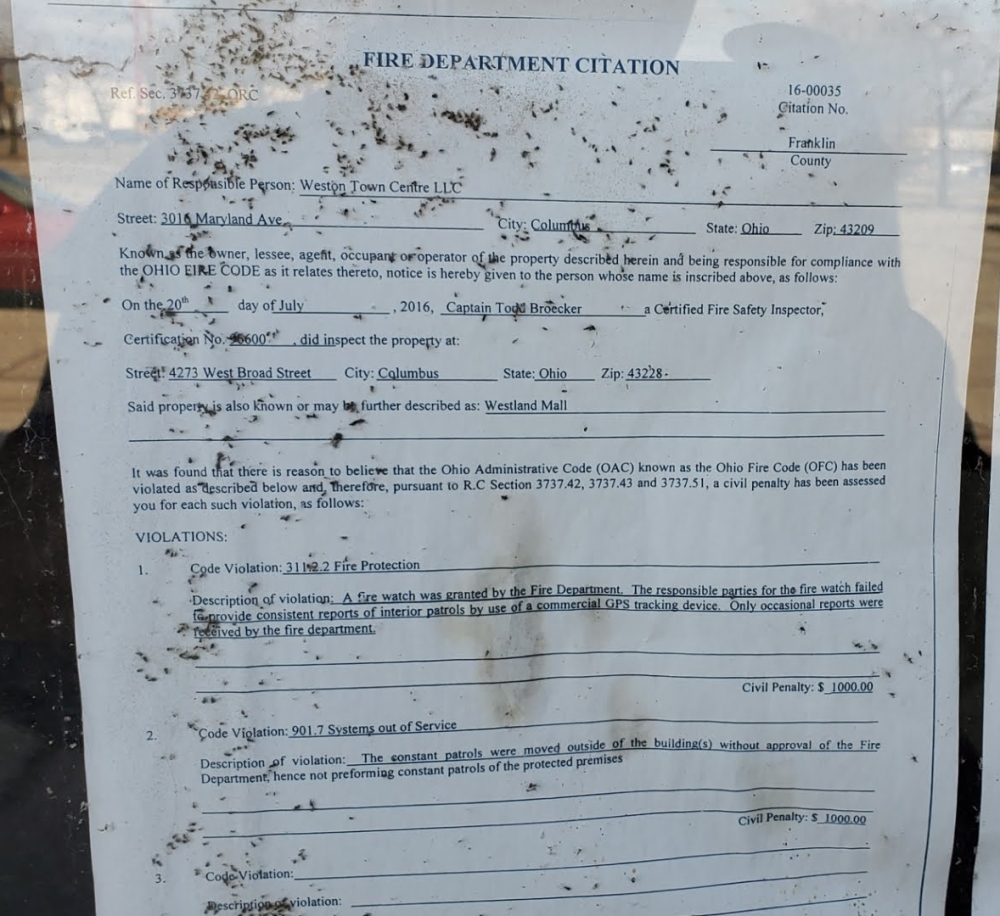 Let’s go take a time machine in this parking lot back to the past.

Though I’m not a fan of taking pictures that aren’t mine, I found a few on Google which will help you understand what this place looked like in its hey day. Though it’s hideous on the outside, I honestly love it aesthetically in the interior.

I’ll take some goodies. Just look at that ’80s neon still glowing, I wish I could have checked this place out in 2011 before it closed. This picture below appears to be from around that time. 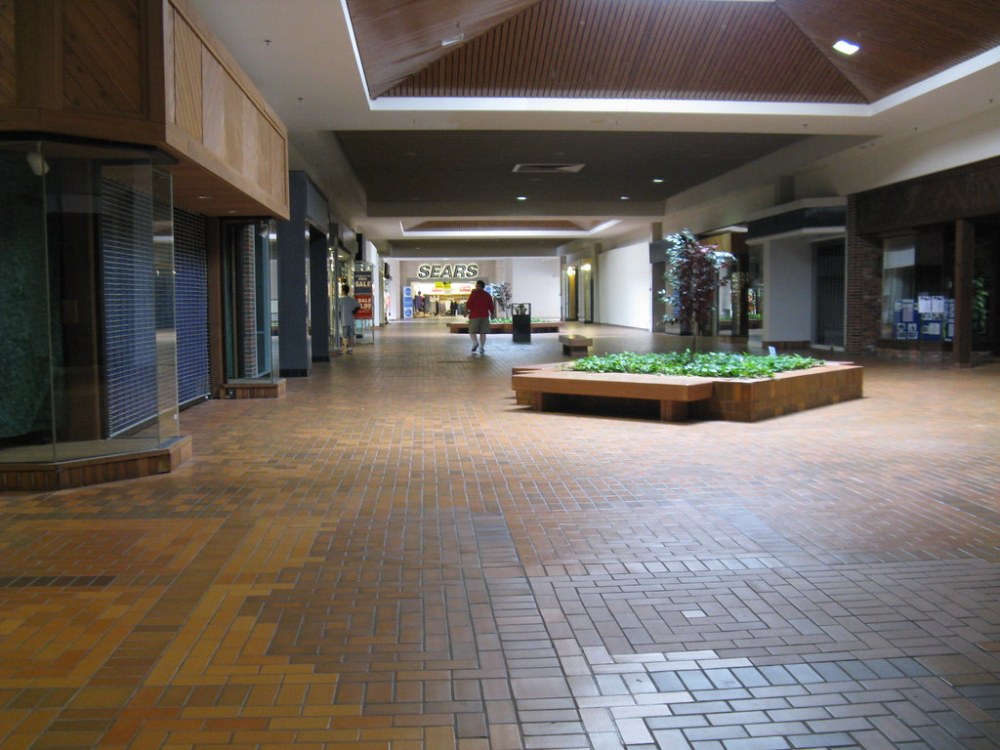 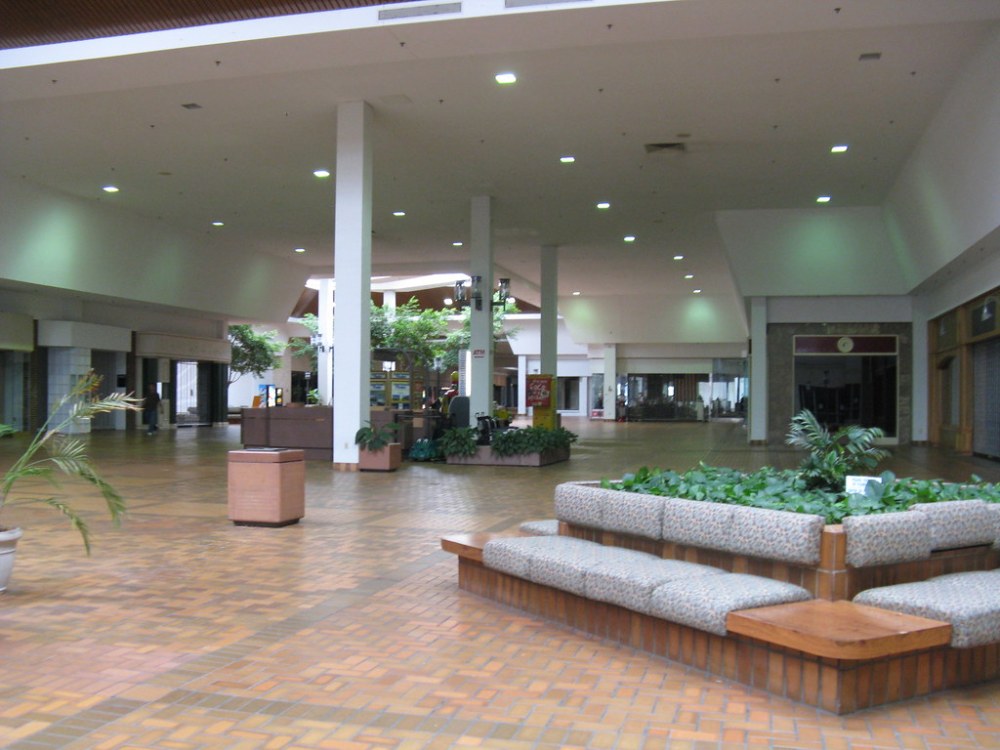 Built in benches: check. Plethora of fake plants: check. Everything I want out of a mall: check.

Not my picture but a really cool shot of how dismantled this place has become.

Westland Mall is a perfect example of what happens when smaller, older malls face competition from nearby newer and bigger malls. I’m not shocked at all that this place looks the way that it does today. Though I would have loved to check it out when it was open, unfortunately our path’s never crossed. Despite that, any one of you living in Ohio should still swing by while it’s still here because it’s an abandoned geek’s dream. If you have the balls and tools necessary to break in and possibly run into squatters smoking crack then go right ahead because I’d be right there next to you. Just DM me. Seriously, I love trespassing.

Though it’s not technically a mall anymore…

Rosie: “Pretty cool, but you know what would be cooler?”

Rosie: “Well I know you were just trying to take pictures and all, but how about I keep this driver window stuck down so you have to drive to Cincinnati in 30 degree weather in the open air?”

Me: “I don’t really see what’s cool about that, please do not.”

From cuisine, music, movies or malls I've got you covered View all posts by Michael Makin